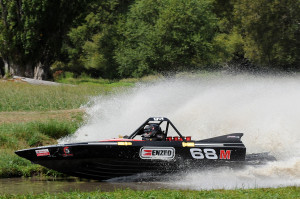 Years of experience on Canterbury’s shifting gravel rivers paid off for ENZED SuperBoat racer Peter Caughey at round four at Hastings’ Crownthorpe track.

“The water is very clean at this spring-fed track but the gravel base makes it unforgiving to anyone who got too wide. But that’s what I learned on, years of racing on gravel taught me not to trash my gear early on, but to save it for the final when it really matters. That’s what we aimed for here as best we could, and it paid off.”

Caughey ended with the fastest time of the day, taking the chequered flag with a 41.55-second circuit, from Leighton Minnell on 44.18, “It was good to see him racing after his team worked day and night to fix the mechanical problems that sent him out a week ago, and he had a mid-to-low 43-second run earlier in the day he couldn’t repeat in the final.”

Pat ‘The Hulk’ Dillon was third in the crowd-pleasing supercharged Ford, with 46.68 – again not his fastest time of the day. “He clipped a couple of islands, as did Leighton who made some humorous remark that he’d seen more of the grass than he intended to!”

It wasn’t an easy run. “The course was difficult to navigate, everyone struggled at some point with the track. It certainly produced some exciting racing, with a good number of thrills for the crowd,” Caughey says.

Garry Stephen was pushing hard with his supercharged boat and had a pretty big crash, “you’ll see that one on television but he’ll persevere, he’ll have to get that boat to settle down and be more predictable. He and his navigator are okay, which is the main thing, and we hope to see them down in Wanaka for round five.”

“Rob Coley had a couple of off-water excursions, he had a jet unit grille drop down at the back and that’s the end of you, it tries to submarine the boat.”

“And in Group A, Wanganui’s Richard Murray and Kesty Manning, they were racing in the top five and had a big crash on one of the real money corners – there were two in succession, which is not that common.”

Caughey says there was a nasty little high-speed chicane you approach blind, “plus you had to go over your own wash, then a short straight led into the hairpin from hell, you had to get right off the throttle, it was a shocker. It was the same for everyone but Richard and Kesty got a bit out of control through the chicane, went over the island and went into a big roll. They’re a bit beaten and bruised, they ate a bit of dirt, but they’re alright.”

Caughey’s grateful for his dedicated ENZED team. “I think every run today we changed something to the boat, or several things; trying to get the boat set up and optimised to suit the water conditions and we got the job done, and learned a heap.”

He’s also grateful for a tip from Total about a better oil for high performance racing. “So we changed the oil on Saturday and the motor’s running better for it. It’s great to get financial support from your sponsors but Total’s technical knowledge is also a big string to our bow, as is the Trojan trailer that carries our precious Sprintec boat.”

Caughey’s team is now driving home from Hastings to its Canterbury base, and looking forward to round 5 at Wanaka at Easter.

“Wanaka’s a very exciting prospect for us, it’s so cool to be racing close to my home ground. There’s so much enthusiasm for jetsprinting at this new level. It looks as if there’ll be plenty of support from south island racers and spectators, and a lot of the north island contingent have committed to travelling down.”

“They’ll be spoiled by the fantastic scenery – there’s something special about driving though the McKenzie country.”

“Meanwhile we’ll make good use of our Trojan trailer as we drive back to our north Canterbury base.”