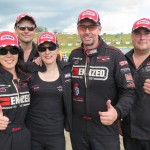 Defending world SuperBoat champion Peter Caughey is calling airlines and calling in favours in a bid to get a vital part to New Zealand before the flag drops on the final round of this year’s ENZED UIM World Jetsprint Championship at Baypark.

A malfunctioning fuel pump sucked power from his boat at Meremere’s round last weekend, and it took all his experienced boat skills for the five-time world SuperBoat champ to wring a second place from the day.

That puts him one point adrift heading into the final round. Caughey emailed with the US supplier late Sunday evening, “The pump will  be ready for dispatch mid-week, but their Wednesday is our Thursday, and with that timeline and a Friday-Saturday event, we’re cutting it fine.”

“We’re putting the call out for someone – perhaps even an airline! – to carry the pump in their baggage from LA to Auckland, as we’re worried that if it’s couriered and there’s any delay through customs or with airline links…”

The good news is that Caughey’s ENZED boat will race either way, “The existing pump is useable and producing the same power as at Meremere, and it’s fairly consistent with its delivery, but being 30 per cent down on fuel pressure, at a world championship final and trailing by one point, is not our ideal scenario!”

Meanwhile Caughey and his spanner crew got stuck in to prep the boat for the big final. Tracksport Engines has given the motor a clean bill of health, though when Caughey stripped the jet unit he found a broken bar on the intake grille. “We’d raced the top three round like that – fortunately the broken halves remained attached, and weren’t sucked into the impellers…”

Caughey wasn’t the only team prepping for the final round. “There was a stream of international competitors at TrackSport, putting their boats through the workshop, or doing basic maintenance, while some were removing motors and jet units for more substantial work.”

This is a busy four days for racers, “But also the organisers heading into what is the biggest jetsprint event in NZ’s calendar, and likely to be the highest-profile event in the sport’s history,” Caughey says.

“We’re looking forward to seeing Baypark stadium chokka and that Mexican wave doing the rounds, and us guys getting to enjoy ourselves with some really intense racing.”

Baypark is a happy hunting ground for boats like Caughey’s Sprintec craft, which prize agility over outright power, “and there are a number of other competitors in a similar situation – Rob Coley would be a notable one, he was setting the pace last year and looking very competitive at Baypark against Australia’s Phonsy Mullan.”

Caughey has to beat Glenn Head to regain his title – and he’ll be hoping to do that, and have another front-runner between them for a clear lead.

“But there are so many scenarios that can play out, and it’s such an intense venue, the SuperBoats have so much power, and in such a small boat on a track that size and that complex, well, it’s all on and anything could happen.”