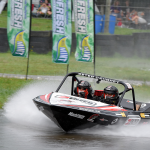 Defending MouthFresh SuperBoat champion Peter Caughey is bringing the big guns out for the penultimate round of the Altherm Jetsprint champs at Wanganui on April 1.

“We believe in that platform, and it gives us a lighter package than a big-block. We believe having a high power-to-weight ratio is hugely important in our sport, as manoeuvrability really counts when you go through over 30 corners in as little as 45 seconds.”

Caughey acknowledges that turbo engines are getting better, “And some tracks favour them,” but is convinced the ENZED team is heading in the right direction.

Getting the mighty engine right has taken collaboration from a lot of ‘like-minded people’, “All of whom should know better,” he quips, “But they’ve done a great job to create another feat of engineering.”

The base motor is an ex ‘Crusty’ Mercier CFE billet 570 engine, bored and stroked by TrackSport Engines in Auckland, and fitted with a Bryant Crankshafts bespoke crank.

“It took five months alone to make that, the project has been another of those long-term projects we undertake now and again.”

Once it was complete, Caughey’s tried and tested ENZED crew grafted the new 600 into the ENZED Trojan SuperBoat, “And although the boat is getting a little long in the tooth, we’re confident she’ll get us through this season.”

Crew member Jeremy Madeley and Sprintec enginner Glen Walters clocked in some exciting test rides on Wednesday night, “And he confirmed it’s definitely got some boogie, you think carefully about how much throttle you give this motor because boy, it delivers.”

In fact, Caughey sums up water testing as revealing that, “It’s a guts – it drinks fuel like you wouldn’t believe – and it’s got anger management issues.”

Joking apart, keeping fuel flowing can be an issue given the size of these engines and the g-forces the SuperBoats experience during every run, but Caughey says his crew has learned a lot from the Quad-Sprint development they’ve also been conducting.

“Our old 575 motor was an engineering marvel, and this new motor we feel has lifted the standard, there are lots of little details that we’ve done, which all took a lot of effort by the Sprintec team.”

The proof will be in the pudding at Wanganui, where last year a $12 switch knocked Caughey out during the elimination rounds.

“There’s unfinished business between us and this track. It’s a night event, it’s a fast and flowing track, superbly presented, and though the lighting has been a bit marginal in the past, the promoters have added extra lighting and they always prep the track very well for a night race, with markers around the corners and the islands.”

The last four elimination rounds will be completed under lights, with the final chequered flag set to drop around 9.30pm.

Caughey says the team has the Trojan trailer packed and on the road Thursday afternoon, ready to put the new engine to the white-hot heat of competition in a bid to extend his championship lead. 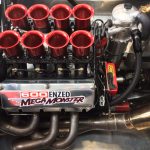 Provisional Top 10 after four rounds of the Altherm Jetsprint champs