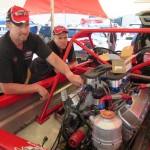 Defending SuperBoat champion Peter Caughey is on his third boat in as many rounds, but sitting in third place after two rounds of the
Suzuki Grand Vitara Superboat championship, the Canterbury battler is determined to keep racking up the points with his ENZED team, and he’ll be racing at Meremere on Sunday, February 15.

His new boat broke a crankshaft at round one, spitting the hull from the water and knocking him out at the top five elimination round.

He returned to Bay Park with a leased boat which failed to fire, and shared Leighton Minnell’s boat to take top points at the meeting.

Now he’s back in the leased boat, “It’s been to the doctor and been dyno tested, so it’s all on for Meremere,” he says.

“We’ll be testing the red rocket on the water in preparation for Sunday to tune it as an overall package, and hope to find some more performance before race day.”

Meremere has some very fast sections, which will favour turbo and supercharged boats, “But we’ll try to regain that through the technical points of the rotation and the areas where we cross the rough water of the wakes, and there are a number of those in this rotation.”

The route taken around the tight network of islands on the track changes for every round, but navigator Karen Marshell is working on memorizing the course as the ENZED team fettles the leased boat.

For they can’t afford to relax. Only a handful of points separate the top scorers, and rapid Aussie Phonsy Mullan is not expected to compete in further rounds of the championship.

“Looking at the overall points tally you can see why there’s such a buzz in the SuperBoat ranks at the moment, the championship is wide open with four rounds to race so it’s anybody’s to win – or lose,” Caughey says.

“Some of the points leaders are new to those positions and they’re pumped. Leighton’s been busily prepping his boat and has found a few areas he can improve so we’re expecting him to be very fast at this event.

The red rocket doesn’t have the power of his own boat – which he hopes will be back in action for round four – but the seven-time world and nine-time NZ champ could have the experience to offset that, and after all, “There’s no point having power without boat control.”

Graeme Hill will be fast with his new Sprintec boat at its third event, “He’s starting to show some serious form, Rob Coley had one of his best results at the Baypark cup three weeks ago, also in a new Sprintec, and Pat Dillon has plenty of power and has made it clear how important this title is to him.”

Caughey says the bottom line at this stage is to accumulate points. “We’ll be after fast, consistent lap times and try to stay in contention as far through the rounds as possible. If we can get into the top five with our leased boat we’ll be grateful, anything after that is a bonus given where we’re at.”

Caughey is thankful the boat’s owner, Brent White, took the news of engine troubles so generously. “You couldn’t ask for a better attitude, he just wanted to know what it’d take to make it happen. I can’t speak highly enough of his attitude, we couldn’t do this event without him, and with the points table so close, we can’t afford to sit it out.”

You’d think Caughey would concentrate on the racing, but he’ll have another job to do come Sunday.

He’s in charge of the new concept Turbo Xtreme, for a class tipped to debut next year. The boats will be identical, from the engine to the hull and everything in between, so results will come down to the driver alone.

“Turbo Xtreme will blitz some demonstration laps at the Meremere circuit, and it’s an exciting little pocket rocket. It produces nearly 800hp and is the first jetsprint boat we’re aware of to run on E85 ethanol fuel. Mike from Turbo Shop Dunedin has done a great job with the motor, completing fine tuning only hours before the boat departed our workshop for its journey to Auckland on its Trojan trailer.”