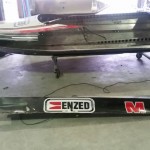 The boat at the Sprintec workshop during repairs

World SuperBoat champion Peter Caughey and navigator Shama Putaranui are on the road to round two of the Suzuki SuperBoat championships in Whanganui on December 27, despite the massive crash at round one which looked set to knock the ENZED boat out of contention.

He’s healing well despite massive bruising and infected scrapes on his legs, and Shama’s shiner healed very quickly, but both are again fit to race.

As for the ENZED boat, that’s as good as new, Caughey says. “It arrived a wreck at our workshop on December 14 after its double barrel roll at 120kph,” and at the time he couldn’t predict whether it would be fixed for round two.

His Sprintec team completely stripped it, by 16th had straightened the hull and had it back to factory spec, and by the 17th the most damaged section – the driver side topside – had been cut out for a new section to be crafted back into the hull.

“Adam did a great job fitting the new side and straightening the chine, during the busiest time of year,” a grateful Caughey said.

“The boat was worked on all weekend by Dave, Jeremy, Ross and myself, I stroked the undercoat on at 1am Monday morning, and it was done just in time for the team at Smarts Collision Repairs to apply a fresh coat of matte-black paint.”

Caughey was rapt. “They’ve done a great job of the paint, especially considering they only had the boat for 24 hours. Gaz and his team at Smarts have supported our team for an impressive 24 years: at times like this you need the best team and the best people on your side, and that’s certainly been evident in the past 12 days.”

“Dave and Jeremy put in some huge hours earlier this week, resulting in the boat being fully assembled and signwritten, ready to race by Christmas Eve.”

Caughey says it a truly amazing effort by everyone involved, and at the worst time of year, too. “It’s fair to say we enjoyed having Christmas day to relax and enjoy time with family and friends. Karyn [Caughey’s wife] and I left the workshop late Christmas afternoon to begin the drive through to Whanganui for round two of the PSP New Zealand champs on 27th.”

It’s been a very taxing few weeks, but as they say, when the going gets tough the tough get going. “I really can’t speak highly enough of my regard for everyone involved in the boat’s rebuild,” Caughey says.

“This puts our world championship campaign back on target with a number of hull, jet and motor developments planned for the next three weeks.”

“Tomorrow’s race at Whanganui will be all about getting back on the horse and fine-tuning the boat after it’s major rebuild, and I’m looking forward to the challenge.”
NOTE

The chine is the section between the side and bottom of the boat, it keeps the water down and gives the boat lift, so also affects its cornering ability.

Points after one of six Suzuki Superboat NZ Championship rounds