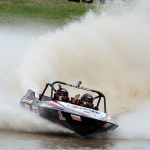 Peter Caughey testing his monster motor in the lead-up to the season. (Photo Ian Thornton)

World SuperBoat champion Peter Caughey is pumped just hours before he leaves his Canterbury home base en route for the opening round of the Suzuki New Zealand SuperBoat series at Meremere on December 12.

“ENZED and Total are confirmed back on board as sponsors for the season and the world champs, heading into the biggest season we’ve ever had, and the largest field of SuperBoats,” he says.

New and existing teams have been spending money to up the ante, with two NZ rounds before the UIM World Champs comes to our shores, “And everyone will be out firing their best shot, “Caughey says.

“I’ve never seen anything like it, we’re all eyeing each other up, we’ve all heard the rumours and man, there’s some excitement out there.”

And when these methanol-breathing monsters hit the water, “we’ll see who’s got the talk or the torque… we’ll know from those lap times who we’ll have to watch.”

The seven-time New Zealand SuperBoat champ is determined to throw his all into regaining his NZ title. He’s got world-championship navigator (and fellow south islander) Shama Putaranui in the nav seat beside him, and Jeremy Madeley has joined regular Ross Baynes on the spanner team in support.

They’ve been working hard on their ENZED boat, for as Caughey says, “A big part of racing performance is won or lost in the workshop on preparation and development, so we’ve been pretty busy.”

The motor is back from the engine builder with its new crankshaft fitted, “at least 20 per cent stronger than the previous one, so we’re hoping the guys at Bryant Crankshafts in the US have done a nice job. It certainly looks like it.”

Caughey’s high-performance monster motor had some issues last year, but this is virtually a new package. “We’re looking forward to having the motor back on song and seeing how good these jet developments are that I’ve been working on.”

The Enzed team is also looking forward to Meremere, on December 12. “It has been a happy hunting ground for us, we enjoy racing there, it’s always challenging, it’s very fast, and the most technical sections of the track are normally preceded by a very fast section, so you have to be very careful how you approach them.”

“It’s easy to carry too much speed,” Caughey says, “and it can get ugly, but it suits our boat, which is nimble. We don’t have the big power along the straights, and admittedly that will favour the twin-turbo boats driven by many of the opposition, but we are confident we have the lightest, most agile package, and hope to make a decent race of it.”

Who has he got his eye on heading into the first round?

“There’s been so much development and investment, and not just in our Sprintec boats, that it could be wide open. We’ll know a whole lot more by end of play Saturday. We’ll be there to race, and race hard.”

“We’re looking forward to it.”