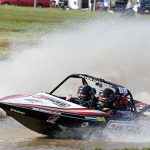 The green flag will drop on the opening round of the Altherm NZ Jetsprint Series on December 10, and Peter Caughey will face a tough challenge in his bid to retain the SuperBoat crown he’s already worn eight times in his successful career so far.

“Twenty SuperBoats have entered this year, which must be a record” the dynamic Cantabrian says, “So we’re facing a stiff challenge in the premier class. But that’ll make for fantastic racing for spectators, and we look forward to an action-packed season!”

Caughey says this is the first year Altherm will sponsor the overall series, “And it’s a successful Kiwi company – it only sponsors winners, and jetsprinting is clearly on the rise, with record entries and growing crowds each year.”

Caughey says “It’s great news that the ENZED boys are back on board, supporting our team. It’s great to have that continuity, and access to the best-quality hose and fittings – it s a natural fit with what we do, both as a race team and within our Sprintec business.”

Better yet he has the same support and engineering team as last season, and the same navigator, with Shama Putaranui back in the co-driver seat.

Caughey says keeping the same line-up is valuable. “It was a new team that worked well together last year, and with a whole season under our belt, we’re working as a very slick package.”

“We’ve ordered a swag of spare parts ahead of time to hedge our bets after last year’s dramatics, with emergency airport runs to collect overseas packages during events, and new members mean knew processes and fresh ideas to inject new vigour!”

Meanwhile TrackSport has rebuilt the motor, with a comprehensive rebuild to take the methanol-gulping eight-cylinder monster out to 575ci – or 9.4 litres – and it’s making more power than ever. But from what we’re hearing round the traps, we’ll need all of that to be competitive against some of the opposition lining up against us this year.”

Round one will be at the Taranaki track. “It’s a new venue we’ve only raced once. For this event the track has been extended, and former world champion Leighton Minnell has put some extra safety parameters in.”

With 46 entered for the event overall, nearly half of that in the rip-snorting SuperBoat class alone, it’ll be an event not to be missed.